You are here: Home / Our People / Nixon Hanna – Principal 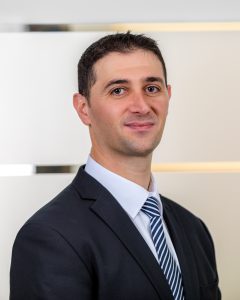 Nixon is well and truly a native of the ‘Gong, having been born and raised in Wollongong and attending St Therese Catholic Parish Primary School and Edmund Rice College in his early years of schooling.

Nixon was admitted as a Solicitor into the Supreme Court of NSW in December 2002 and is admitted to the High Court Roll. With a degree in both Commerce and Law from the University of Wollongong, Nixon has knowledge and experience from both legal and financial roles with some of Sydney and Wollongong’s major firms and government organisations, including having provided legal services for the NSW State Government at the Crown Solicitors Office.

As the principal lawyer at Hanna Lawyers, Nixon has over two decades experience in the law. He can assist you with all of your property needs and has extensive experience in family law, succession law, criminal law and civil litigation.

Nixon believes in working hard to bring disputes to an early and appropriate resolution for his clients without compromising his clients entitlements.

In his spare time Nixon loves to play and watch all types of sports. Despite having had two major surgeries from football related injuries, his love for playing the sport has not waned, much to his wife’s dismay!

As a small Wollongong law firm we pride ourselves on providing a personal service in which the client deals directly with the solicitor with carriage of the matter.

We provide a high quality service which is efficient and affordable.